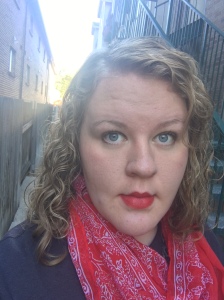 Until recently, staying nervously silent as often as possible was one of the main goals of my day-to-day existence. You could say I come by the trait honestly.

In one of my first memories of social frustration, I was three years old and a store clerk at Albertson’s tried getting me to talk to him. The little girl in front of me in line giggled and told him all about her recent vacation, and I cringed at her foolish, cutesy behavior. When the clerk asked me how I was doing, I just stared, blankly, from my seat in front of the cart, mastering RBF before I even knew what that was. My emerging sass melded nicely with the well-established shyness, and a legacy was born.

By the time I started school, things got weirder. The first half of the year, I hardly talked to anyone, especially the teacher. She’d bring it up in parent-teacher conferences and my Mom would come home asking why I never talked. By the second half of the year no one could get me to shut up around my friends, but I still hesitated every time I had to say anything to a teacher. Authority, especially attached to people I admired, brought out a piercing fear of failure I’m STILL trying to combat.

Entering the Young Women’s program as a 12-year-old was a bit of a nightmare. I knew I was supposed to be having fun, but couldn’t believe I was expected to function around all the cool, angsty older girls I’d known my whole life. Nothing scared 12-year-old me more than 16-year-olds with boyfriends who went to seminary and stake dances. I showed up to just about every activity but hardly spoke for the first few years. Luckily, some excellent leaders, the entire premise of girls’ camp, and an extroverted best friend helped me through the later stretches of the church youth program, but my struggles with socializing were far from over.

In high school I met my closest friends during freshman year band camp, and didn’t stray much from that group. Honestly, I chose my friends based on how equally-unpopular they were, which is actually fabulous advice for high school students. My fellow uncool friends, to this day, are some of the loveliest people I know, AND I never even came close to confronting the sex-and-drugs variety of peer pressure. We, collectively, had no idea how to obtain either.

One friend I made later in high school, also a band child who’d moved in before the start of Junior year, told me that she thought I disliked her because I’d never have actual conversations with her in our first class together. She’d try and engage with me, I’d reply with the required number of pleasantries and perhaps a bit of nervous laughter, and promptly walk away. Because that’s just who I was. Once I realized how many mutual friends we had, things picked up and became decidedly less odd, but hearing her side of things forced me to wonder what was wrong with me for the first time.

I learned soon enough that staying quiet was a coping mechanism that prevented me from embarrassment, regret, and social rejection. If I didn’t say anything, the odds of saying something stupid or wrong were virtually zero. It seemed like a win-win to me.

Things didn’t get better in college. My professors, as much as I loved them, freaked me out even more than my high school teachers – they had doctorate degrees! And some of them had written real-life, actual books! Saxophone lessons were weekly one-on-one anxiety sessions. I dreaded introductory small talk with my peers. I could get into decent conversations with my roommates and coworkers, but the ever-present nature of those relationships hardly gave me a choice. In most public spaces – church, classrooms, the universe at large – I aimed for the path of least resistance. For me, that meant silence.

My first creative writing teacher – a young, tall, dark-haired, super smart, married-with-a-baby, glasses-wearing, vegan, feminist grad student – terrified me. I loved her, wanted to be her someday, and felt entirely unworthy in her presence. I could hardly get a word out when picking up assignments from her after class. To this day I’m sure she has no idea the kind of impact she had on me, because that’s not something I could ever tell her. She was far too cool – I couldn’t even imagine forming a meaningful student-instructor relationship with her.

Soon after I started realizing how frustrating some of my tendencies were. Why did I constantly fear raising my hand in class? Why did sending professors practical emails result in instant, foreboding regret? Why did my heart race every time I had to make a phone call to someone I didn’t know? Why did I label soooo many people as “cooler” and therefore not worth talking to? Why did I over-analyze every tiny moment of awkwardness for weeks – EVEN YEARS – after they occurred? Why did I assume most people disliked me?

The funny thing about social anxiety is that once you acknowledge its existence, it’s hard to give it much power. When I realized my lack of self-confidence – a bigger problem than occasional shyness – was keeping me from making meaningful connections, I knew change was in order. I had to learn to love myself, and acknowledge that even if other people didn’t love me, that was none of my business, and nothing I should take too seriously.

For a spell, I did actually try fitting into the dominant culture here in Provo. Freshman year I attended FHE, every single’s ward activity, game nights with our neighbors, gruelingly-awkward blind group dates. Though I tried convincing myself I was having ~tons of fun~, that fantasy didn’t last long. I hated the constant pressure to date, the fakeness of people trying to befriend the quiet girl out of Christian obligation, the awkward home teaching appointments. I realized pretty quickly that socializing, if done right, shouldn’t be deeply uncomfortable.

As it turns out, the single’s ward is not the greatest place for me. I tried to make it work and I still attend regularly, but I’m beginning to learn that any real sense of belonging will likely only exist outside the bounds of Sunday school, and that’s okay. For me, gaining control of my anxiety meant realizing that maybe I wasn’t always the problem, that maybe YSA church activities would never feel especially fun and that I simply hadn’t found my place yet.

I studied abroad sophomore year and learned that professors – even the amazing ones – are, in fact, people. They have families and friends, do laundry, eat Nutella by the spoonful at night time, wear pajamas, and have grouchy days. I was surprised to learn that they actually like conversing with their dedicated students, sharing their knowledge and showing them beautiful British places. It was the first time I could semi-comfortably talk with my superiors, it felt great, and I realized how much I could gain by leaving my silent comfort zone.

After coming back to the anxiety cesspool that is Provo, I took another creative writing class from a lovely man who had written an essay I studied in the previous course. To me, he was famous, and that didn’t even scare me. I engaged fully with the workshopping process, submitting mediocre essays and learning not to freak out when my classmates discussed my work. I eventually learned to love the undivided attention (crazy, I know), and enjoyed offering tips to fellow writers when their turns came. My professor helped me realize my potential, encouraged me to develop my skills, and still assists me in figuring out my journey to grad school and beyond. If I had let his success intimidate me, none of that could have happened. Learning from his expertise, far from of reminding me of my own inadequacy, helped me realize who I could potentially be someday, and that is AMAZING.

These days, when I meet authoritative figures/potential role models, I don’t cower in unworthy fear. Instead, I wonder what I can learn from them. How can their awesomeness turn me into a better person? How can I get to know them and learn from their ample experience? It’s a pretty exciting prospect, and I think it has turned me into a better, kinder, more thoughtful person.

I found happy spaces. I have English major friends now. I took a seriously life-altering women’s literature course (which yes, I think I mention in just about every recent blog post, and I’m not even socially anxious enough to care about sounding too enthusiastic). I met new friends who love books and women, two of my favorite things as of late, and hate Donald Trump, which is great and deserves no comment beyond that.

I’m registered for the Women’s Studies colloquium, and love surrounding myself with women’s studies minors who care about the things I care about, learning about amazing, admirable women doing good work in this world. I’m interning at the writing center, and learning how to connect with students who can benefit from my help has been a great experience. Making money doing something that isn’t horribly stressful has also turned out wonderfully.

I’m also learning that my peers – even the scary-competent ones – are actually great people going through the same things as I am. They don’t, as far as I know, think I’m a huge loser. After attending a previous classmate’s book club, I told her how much I enjoyed it. I explained how bad I am at attending gatherings alone, especially when I don’t know anyone well, and that I was glad I ended up going.

To that, she responded, “No worries! You’re one of us,” and I kind of melted. Was I REALLY one of them? I’m still not sure. As far as the anxious bit of my brain knows, they’re all more successful, normal-er, cooler people than me. Fortunately, the critical-thinking part of my brain has gained traction lately, and tells me that as long as I’m here and they’re willing, I might as well join them.

I find myself now with a post-anxiety high. I want to make up for lost time and befriend everyone. It’s kind of freaking me out. Now that I’ve started talking, I literally have no idea when to shut up. I find it both horrifying and hilarious, and overall empowering.

I’ve learned that maybe, possibly, I’m allowed to sincerely believe people when they compliment me. That maybe they aren’t only saying nice things to hide the fact that they dislike me. At the very least, they care enough to make something up, and want me to feel good about myself, and maybe I should; I’m certainly not hurting anyone by dropping the self-doubt.

Don’t get me wrong – I’m still as introverted as ever. I delight every time I come home to an empty apartment, and I love an occasional home-bound weekend. I love books and the internet and by-myself writing time. Everything about this social journey exhausts me, but it doesn’t scare me anymore. I’ve learned that interacting with other people is far less worrisome than I’d always assumed, and that choosing to love them unapologetically instead of fearing everything about them is a much healthier way of approaching this world.

I’m still not perfect. Who’s to say this will last? Maybe I’m only experiencing a small moment of grace, and those old insecurities threaten to return at any time. The future is obviously a giant black hole of not knowing, but for now I’m choosing to go with it. Maybe, if I can commit to this beautiful goal of never shutting up again, I can convince even the quietest of girls that her voice is, in fact, worth something – that we, as people, are born with the right to speak.